Bureaucracy, Barriers and The Primary Ps of Innovation That Fix It All
Q&A: Shaping Great Innovators with the Holodeck Accelerator
Why Don't Innovation Platforms Work?
This Rule of Innovation May Be Misleading You
6 Easy-to-Follow Innovation Resolutions for Leaders & Innovators
Introducing: Founder & CEO Rachel Kuhr Conn 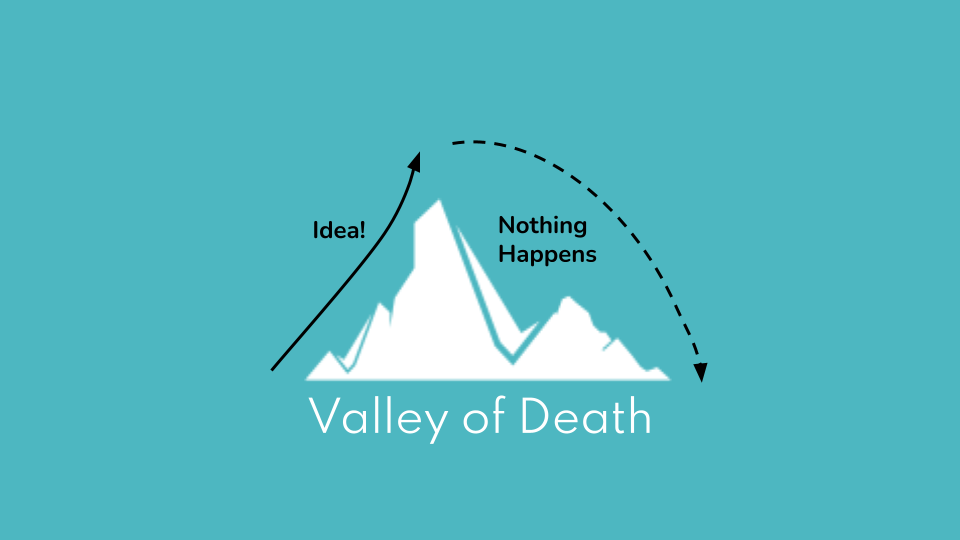 How To Overcome the Innovation Valley of Death

The valley of death is the place where awesome ideas go to die. It's where solutions get lots of support to get started, but then they fade into the ether when it comes to making them happen. In my own experience as a corporate innovator and consultant, I’ve experienced the valley of death more times than I can even count. It was my experience in venture capital that really got me thinking about ways to effectively solve it.

But before we dive into how the venture capital approach solves the valley of death, let’s start with the typical corporate innovation approach. It goes something like this:

> Innovators experience a problem and think up a solution.

> Then they spend time and money to build a prototype and test it.

> Then they pitch the solution to leadership and ask for funding.

Case in point: When I was working as an innovator in the manufacturing facility at a Fortune 500 corporation, I discovered a $50 million dollar a year problem. People would accidentally put the wrong chemical in the wrong machine, and it would ruin millions of dollars worth of product inside. So I created a simple prototype to solve it. I put together some hacked together labels and signs that would make it a lot harder for the mixup to happen. We tested it for a few months and no one made any mistakes, but I was constantly having to remake the signs. So I pitched my solution to several different leaders. I was looking for a modest investment, so I could create permanent signage for the machines. No one cared. It didn’t happen. The makeshift signs eventually came down, and the $50 million a year problem continued to happen.

As I’ve experienced so many times, the Problem, Prototype, Pitch approach often leads to failure. These are the biggest reasons why it doesn’t work:

> Too much time and money is spent on prototyping without proper validation.

> Solo (and often siloed) innovators don’t have access to the right feedback from the start.

It wasn’t until a few years later when I was working with serial entrepreneurs in Silicon Valley that I realized how to solve the valley of death. My Problem, Prototype, Pitch approach was off. Entrepreneurs looking for startup funding took a slightly different approach. Here’s what they do:

> Entrepreneurs experience a problem and think up a solution.

> Then they pitch the solution to angel investors and ask for seed funding.

> They work with the right experts to build and validate a prototype.

I found this nuance interesting. They pitched before they prototyped.

Being a researcher by nature, I dove into this difference to figure out why it seemed to work better than the corporate approach. Here’s why the Problem, Pitch, Prototype approach that entrepreneurs take is so successful:

> Bringing in an investor at the beginning prevents innovators from spending too much time and money on the wrong prototype.

> A resource plan is put into place from the get-go, so entrepreneurs know what to work toward and when to ask for more funding.

> Pitching a solution before prototyping gives innovators the opportunity to access experts they normally wouldn’t have access to.

To summarize, there are two primary reasons why the valley of death happens at big organizations that can be solved by a more entrepreneurial approach:

> Poor resource planning. Leaders spend too much money to get ideas started then the project runs out of funds and gets stuck.

> Poor process planning. The innovator doesn't think about what they're going to need next to succeed.

Taking a cue from the venture capital world would do big organizations - like corporations or even military and government - a lot of good. The Problem, Pitch, Prototype approach not only resolves the valley of death, but it also accelerates innovation and makes individuals far better innovators. It’s a win/win.

To learn about what actions leaders and innovators can take to resolve the valley of death, watch my recent webinar here. 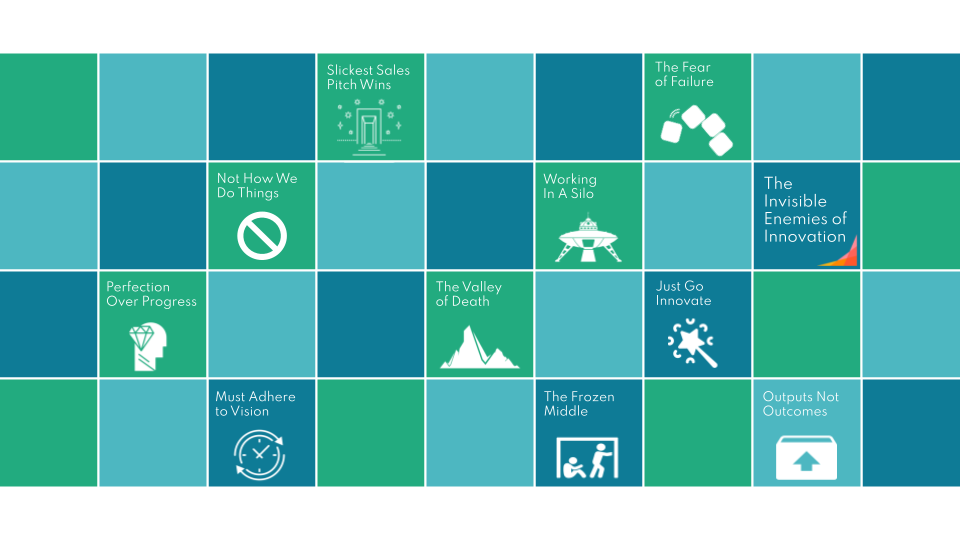 10 Invisible Enemies of Innovation & How To Eliminate Them

Over the last several months, we've conducted webinars on the Invisible Enemies of Innovation to highlight common roadblocks to innovation success and how to address them. We focused on easy-to-implement tactics that innovation leaders can use to quickly change the way they innovate. 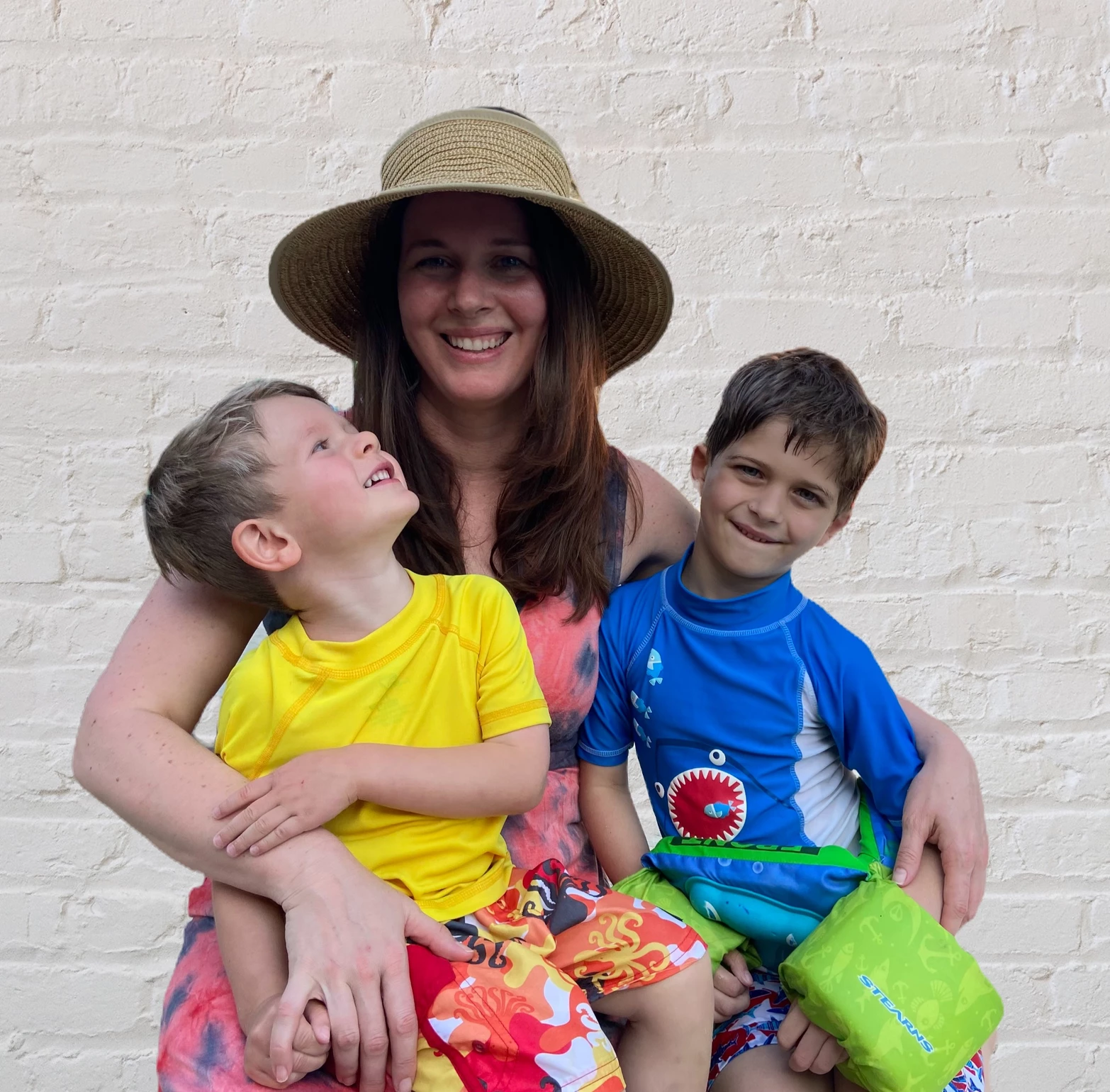 As Productable’s head of marketing and employee number three, Jennifer Prishtina is charged with building our brand from the ground up.